B. 1993 in Hrodna, Belarus. Graduate of the Faculty of Intermedia at the Academy of Fine Arts in Kraków (BA). Shostak is pursuing a Master’s degree at the Academies of Fine Art in Warsaw and Kraków. Interested in site-specific art, crowd psychology, and Conceptual art, among other fields. Currently in love. Participant in Biennale Wro, Wrocław, 2015; Manifesta, Zurich, 2016; Pastificio Cerere, Rome, 2014; Sziget Festival, Budapest, 2014; Independent Art Fair, Stockholm, 2015; among other events. Shortlisted for the Młode Wilki ’15 award. 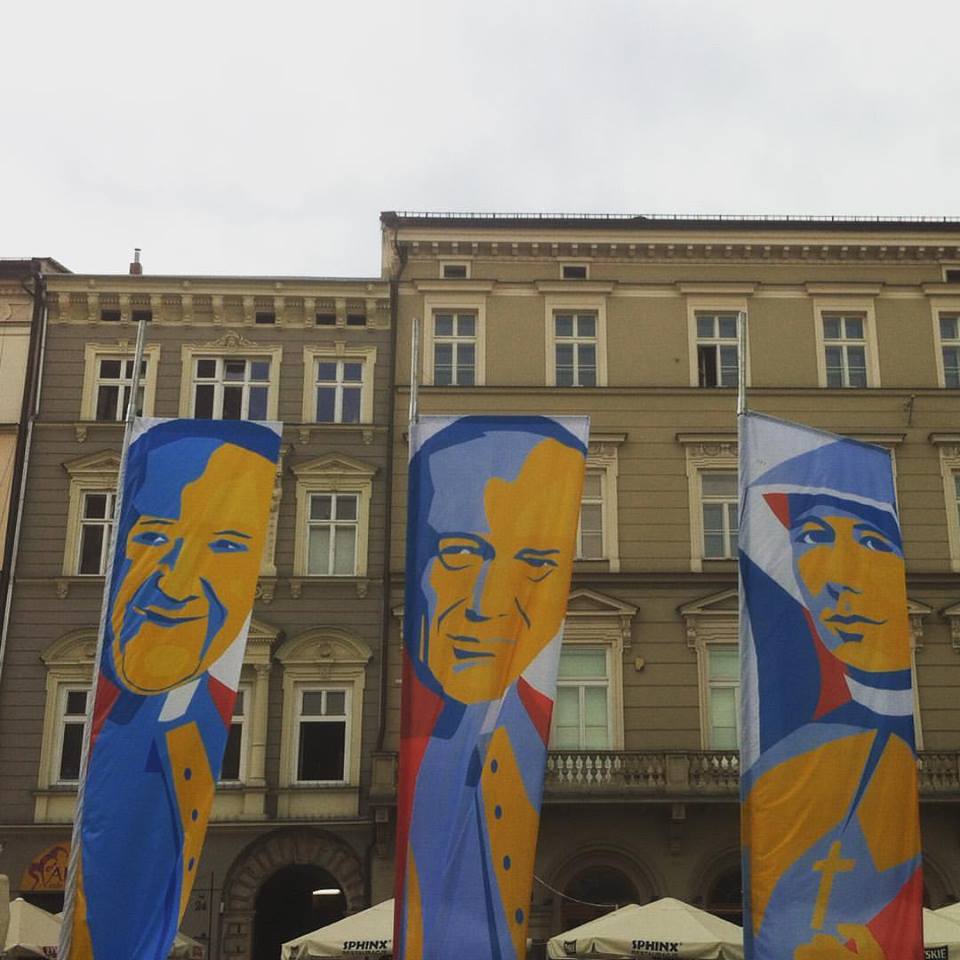 During this year’s World Youth Day, the artists replaced one of the flags installed for the occasion at the Main Square in Kraków (presented in the exhibition) with a flag featuring the image of Pope Francis, created by emulating the visual identification of the event. Although the action of the artists had not been agreed upon with the organizers, as World Youth Day volunteers the artists did not face any obstacles, and they even received help to install the banner from firefighters who happened to be working nearby. The new banner remained in the Market Square for the duration of the event.

In the lead up to the event, the artist’s noticed an apparent omission of Pope Francis from the World Youth day promotional activity. This work was their riposte. Despite explanations from representatives of the Church that John Paul II appeared on flags in the Main Square as a patron of the event (alongside St. Sister Faustina), Olbrychtowicz and Shostak were not alone in the impression that the Polish organizers of the World Youth Days wanted to spotlight above all the “Polish” Pope. Similar comments appeared after an invitation to the event—which was read aloud in churches across Poland—failed to mention the visit of Pope Francis to Kraków, whereas the name of John Paul II featured twice.

Such “repression” is indicative of the attitude of a section of Catholic milieus in Poland towards the pontificate of Francis, which is recognised as groundbreaking in terms of the Pope’s praise of openness, tolerance, and modesty. The Catholic hierarchs in Poland and their political allies may sometimes find it difficult to reconcile the declarations and appeals of the Pope with their own promoted views. Hence the perception of Pope Francis in Poland is not always uncritical and his authority as the head of the Church is sometimes subject to relativisation.
As a mass event that attracts worldwide media attention, the World Youth Day provides an excellent opportunity for a variety of manifestations outside the official program. Jana Shostak not only replaced the flag in the Main Square, but also appeared at the internationally televised meeting between the Pope and volunteers with a banner “PAPA CALL ME!” and her phone number. Activities pursued during the World Youth Day by the artists, and by the group Faith and Rainbow (also present in the exhibition) are characterized by a critical edge that originates from within the community. The artists and activists wanted to become rightful members on the community’s own territory, which they “used” in a creative way. Their goal was not to negate the community or to demand a revolution, but to negotiate concessions, which they see as a more realistic pursuit if tangible change.