B. 1987, sculptor, action, and installation artist. Graduate of the Faculty of Sculpture of the Academy of Fine Arts in Gdańsk, works in the Tri-City and in his hometown of Lidzbark Warmiński. Cofounder of the Rokosz Group, which provides education programs for impoverished rural areas. Szumczyk is interested in the elements of common history that stir strong emotions for various reasons (from nostalgia to repression) and the way they resonate in a contemporary context. An example of such works, whose presentation becomes a performance in public space, was the sculpture “Komm Frau” in Gdańsk, and the project “S.O.S.,” which was presented and blocked during the opening of the European Solidarity Centre in Gdańsk. 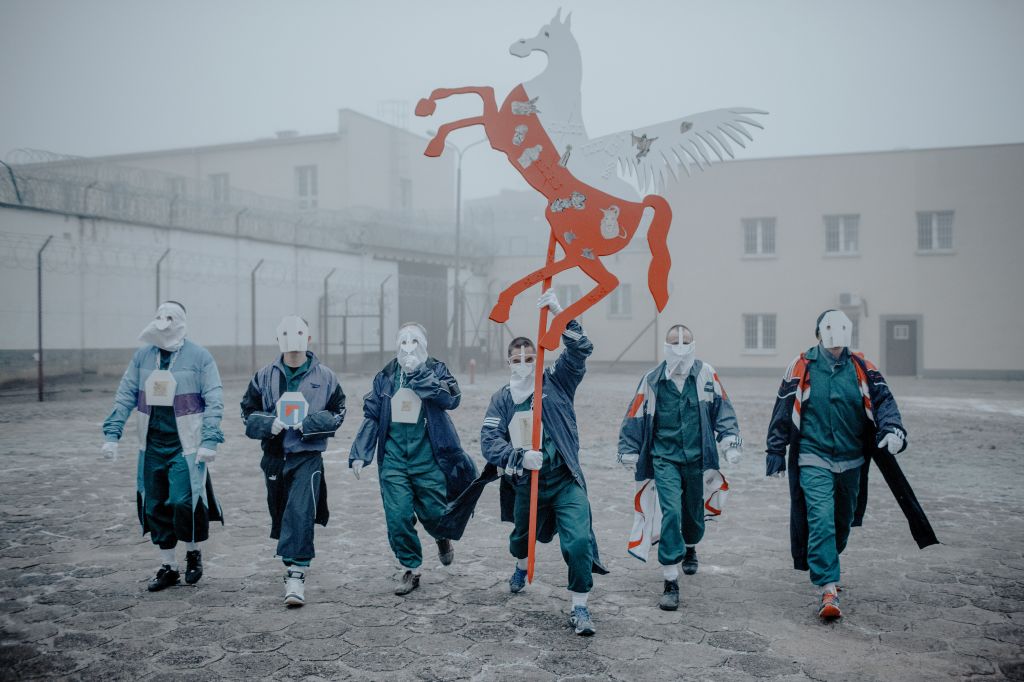 In the popular social imagination, a concern with and pride in the past—especially one that rests upon the country’s military strength during the period of the Polish-Lithuanian Commonwealth—is a key sphere revealing a collective perception of history. In his project “Lisowczycy” (“Polish Elears”), Jerzy Bohdan Szumczyk brings to the fore similar imagery that deeply resonates in its social context.

The artist seeks a contemporary form for his protagonists to materialize and become embedded in today’s reality. The project involves a group of inmates from a male prison in Iława, who assume the role of soldiers of a light cavalry unit—the eponymous “Polish Elears,” notorious for their brutality in war. Wearing masks (they are banned from showing their faces) and traditional garments of the Polish nobility, designed together and produced out of tracksuits, the participants stage the moment in which an attack is mounted. The project is indicative of the artist’s strategy in creating works that stir turbulent social emotions, but at the same time escape unambiguous judgement.

In an era marked by the ubiquity of patriotic visions debated in public, and the consequent flattening of such meaning to the inevitably simplistic perception of history, Szumczyk does not deploy a straightforward critique, but instead appropriates elements of the same imagery. The artist uses this visual language as a tool to disarm “grand” history and also concludes a participatory project with the view to renegotiate the community’s vision of the distant past.

The presented work does not focus on history and the way it is understood. It is an operation pursued with a social vision of the way by which imagination shapes the perception of history. In comparison with traditional reenactments and stagings of historic events—which petrify widespread historical beliefs—Szumczyk’s projects act as a vehicle of imagination designed to complicate the image of the past and to review it through the prism of popular culture and contemporary contexts.