An artistic duo—Zofia Kulik (b. 1947 in Wrocław) and Przemysław Kwiek (b. 1945 in Warsaw)—active between 1971 and 1987. After graduating from the Faculty of Sculpture at the Academy of Fine Arts in Warsaw, the artists continued their research into the theory of Art of Activities—“ongoing efficient conduct in specific life, artistic, social, political, mental, material, and spatial situations.” In practice, such activities led them to produce harsh criticism of the Polish experience under Communism as well as to their engagement in a radical struggle with the institutions of the then-active political regime. The artists merged art and daily life by principle. They belonged to the first generation of Polish artists who rejected traditional means of expression at the turn of the 1970s and concentrated on the use of media as well as the mechanical record and reproduction of images. 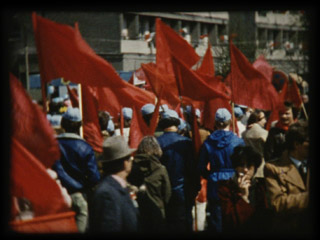 At the beginning of the 1970s, the artistic duo KwieKulik—Zofia Kulik and Przemysław Kwiek—found themselves among a group of artists who firmly embedded their artistic activity in a socio-political frame and proposed art that was intended to open the possibility of rethinking the dominant political doctrine and its underlying ideology.

Kulik and Kwiek also concentrated on the aesthetics of state propaganda, official gatherings, and celebrations. The artists pursued visual research into this sphere, which formed a major part of their artistic activities in such projects as “Variations of Red” from 1971. The beginning of the 1980s saw a cycle of film documentation produced under the common title “Manifestations,” which featured substantial public gatherings: the May Day Parade of 1979 in Warsaw, and mass celebrated by Pope John Paul II (also held in 1979 in the Polish capital). The other two ceremonies were filmed from television broadcasts of the Olympic Games in Moscow in 1980 and the ceremonial funeral of Leonid Brezhnev in 1982 in the capital of the former USSR.

The film footage created by KwieKulik portrays public gatherings of diverse character: political, religious, and sporting events, while the breadth of their ideological spectrum is striking. Crowds are drawn both by a Papal mass and by a May Day Parade— events which sit at opposite sides of the ideological continuum. As we watch the images of groups united in celebrations we may find it difficult to recognize them as genuine communities. They seem to be decreed in a top-down fashion by the state authorities or formed under the powerful influence of religious or sporting symbols.